Fargo is covered in art. Literally. Everything from the buildings to the electrical boxes are coated with the amazing works of local artists. Every few blocks a new mural awaits. Below is a list of some of the murals in the Fargo are that you can check out.

We’ve created a handy map that you can print and take with you.

Jump in, get involved, and get that perfect Instagram shot with one of these murals. 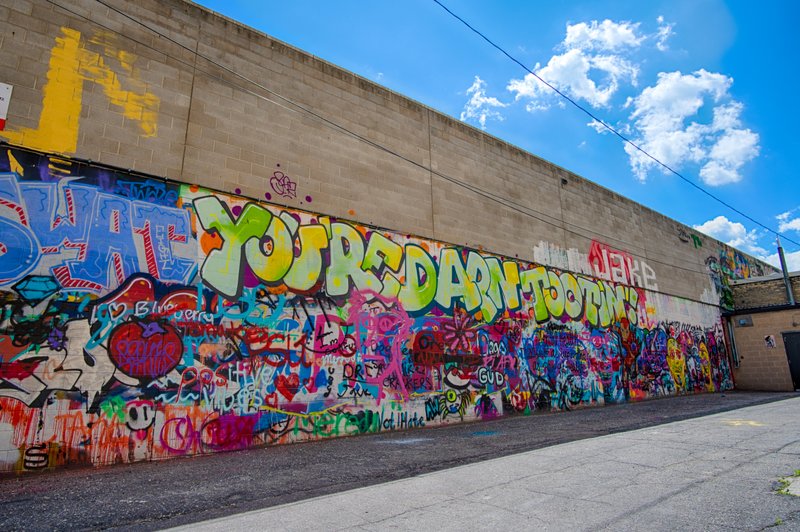 In 2015, the alley behind The Forum building was designated as a legal street art wall. Since then, the art of this alley has changed frequently. Walk through and see what’s new. 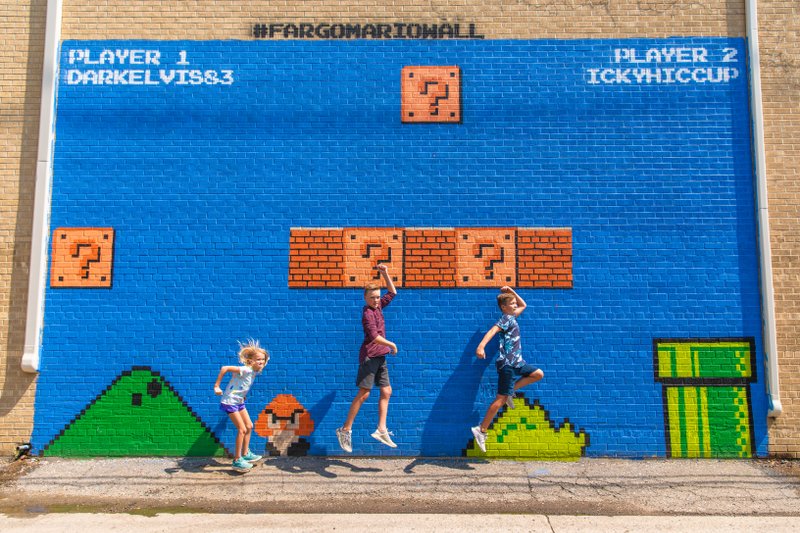 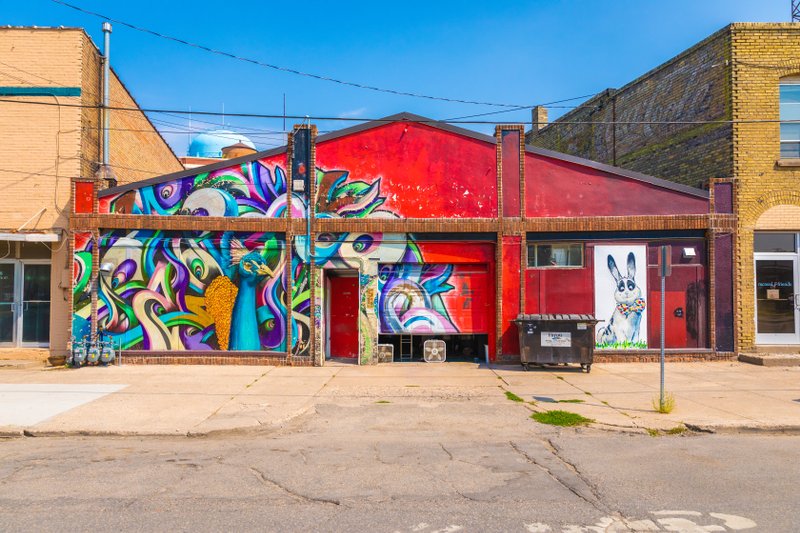 This peacock mural has become so iconic in Fargo, it seems like it’s been around much longer than it actually has. Painted by Paul Ide in 2010, the mural adds a wonderful vibrant pop of color to Roberts Street! 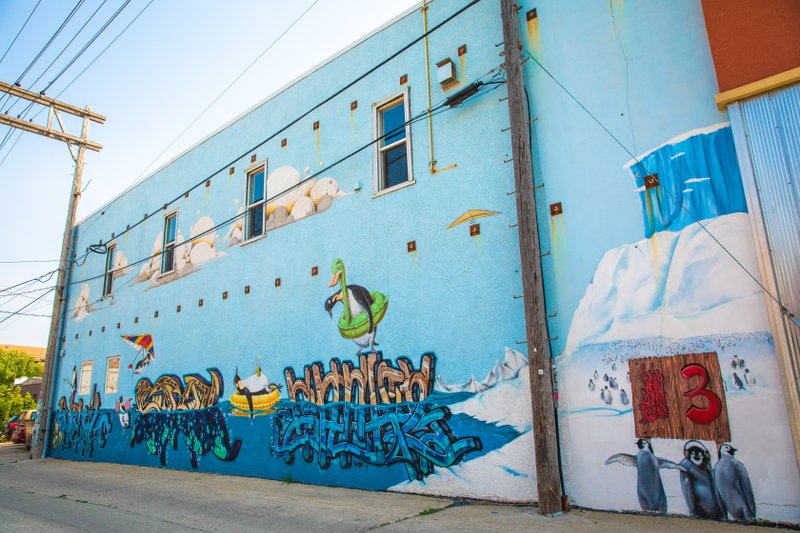 There’s so much to appreciate about this mural. First of all… penguins. Who doesn’t love penguins? Especially penguins that are hang gliding, fishing and using floaties. This painting was done by Paul Ide in 2011 as part of ‘Hip Hop Don’t Stop,’ an event that happened annually in Fargo from 2009 to 2011 and featured aerosol art creation.

Alley on 2nd Ave between Roberts St. and Broadway, Fargo 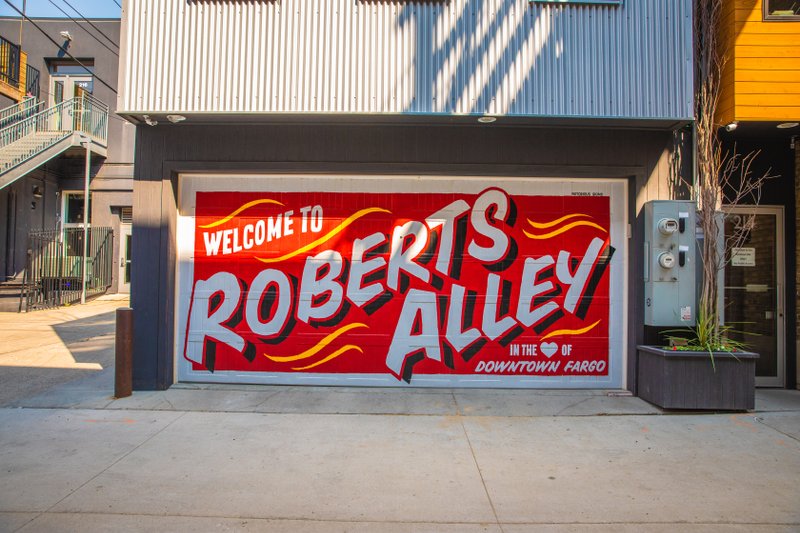 Create your own postcard-worthy shot in front of this ‘Welcome to Roberts Alley’ mural, adorning a large garage door tucked inside this hotspot of activity in Downtown Fargo.

Alley on 2nd Ave between Roberts and Broadway 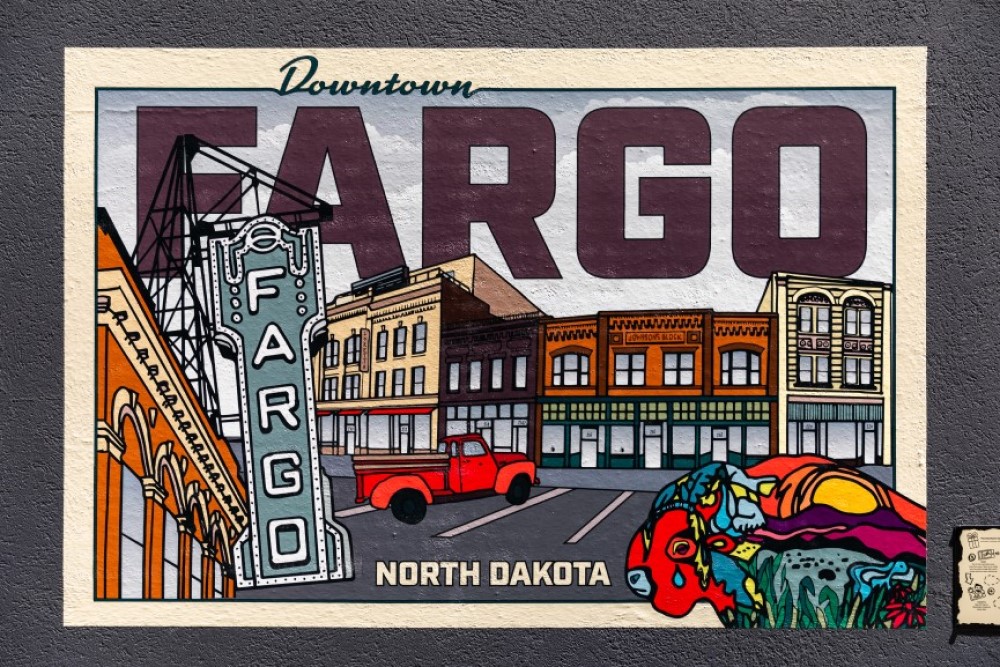 Another Roberts Alley favorite, the Downtown Fargo Postcard mural is a depiction of Downtown Fargo and many of the great, historical buildings that line the streets. 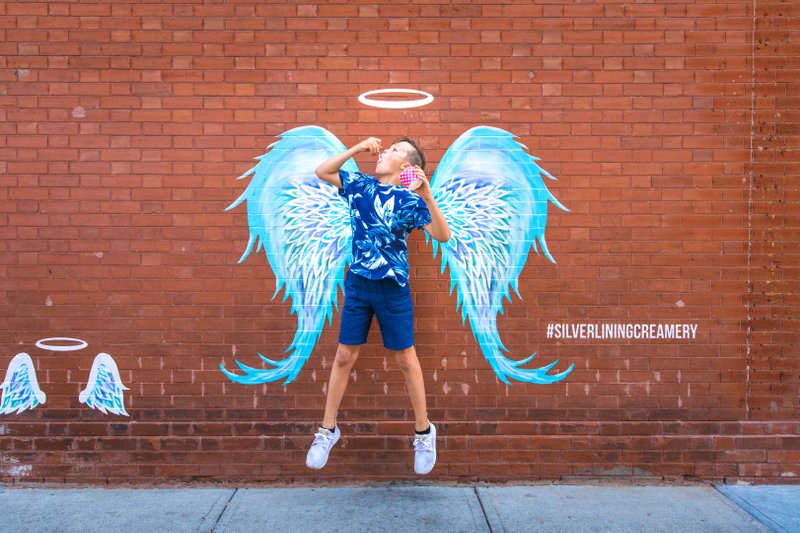 One of the most photographed murals of the last year, the wings outside of Silver Lining Creamery create a fun, interactive shot for people (and dogs) of all sizes.

Corner of Main and Broadway, Fargo 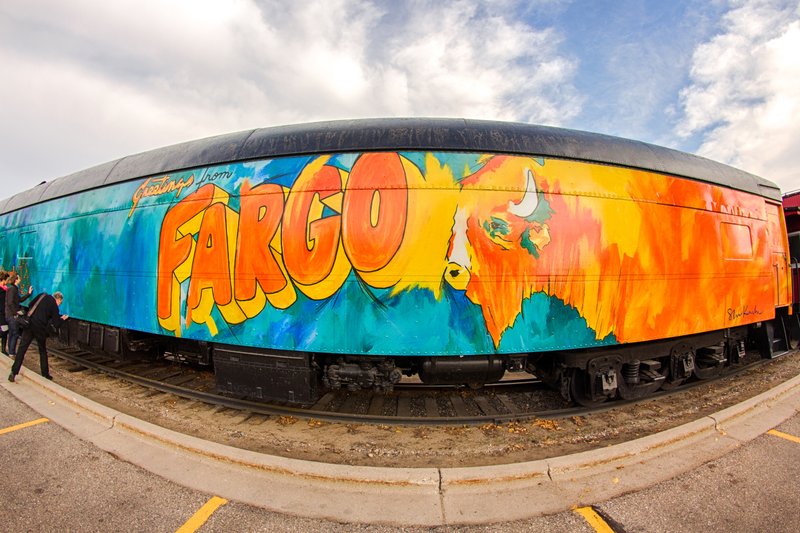 Another masterpiece by Steve Knutson, visitors and locals alike head to the Greetings from Fargo train car to commemorate their time in our fine city.

300 Broadway in the alley, Fargo 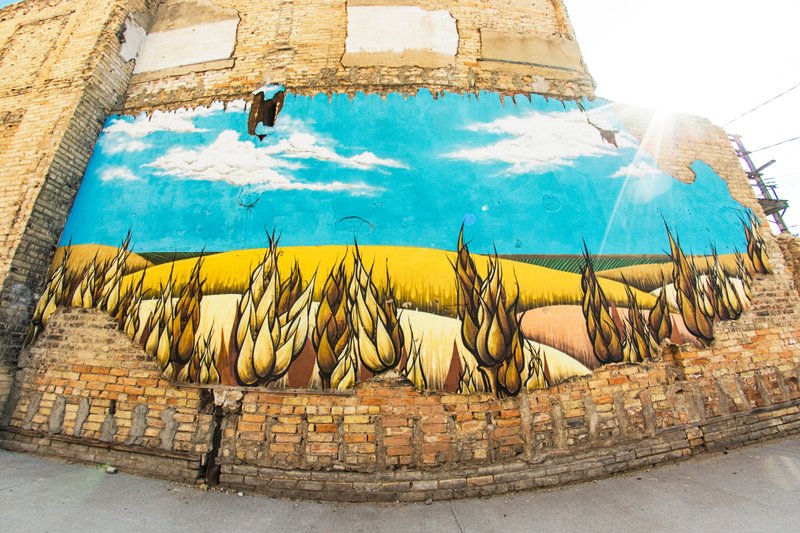 This North Dakota-esque painting is a nod to the prairie heritage that many in the Fargo-Moorhead community relate to. According to the artist, Paul Ide, he used the imperfections of the surface as design elements, and that makes the mural even more beautiful. 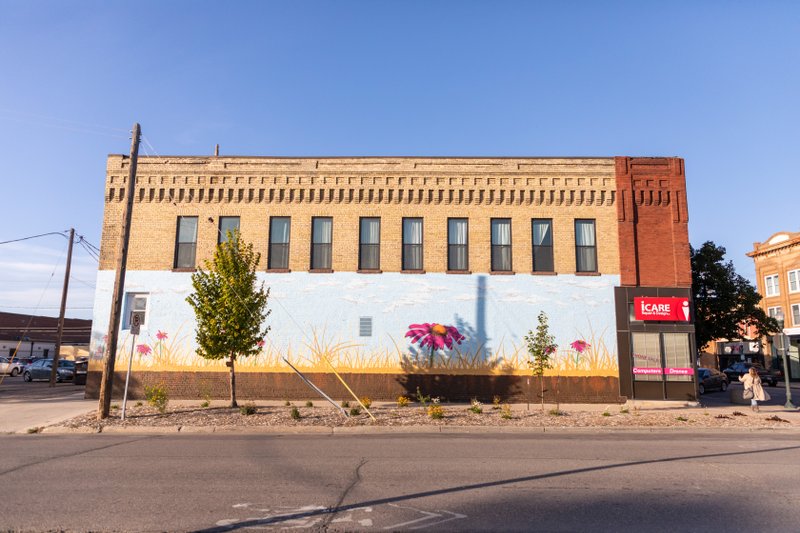 Another ode to the wheat fields and wildflowers of North Dakota, this expansive mural covers the side of one of the historic buildings on Fargo’s 8th Street. 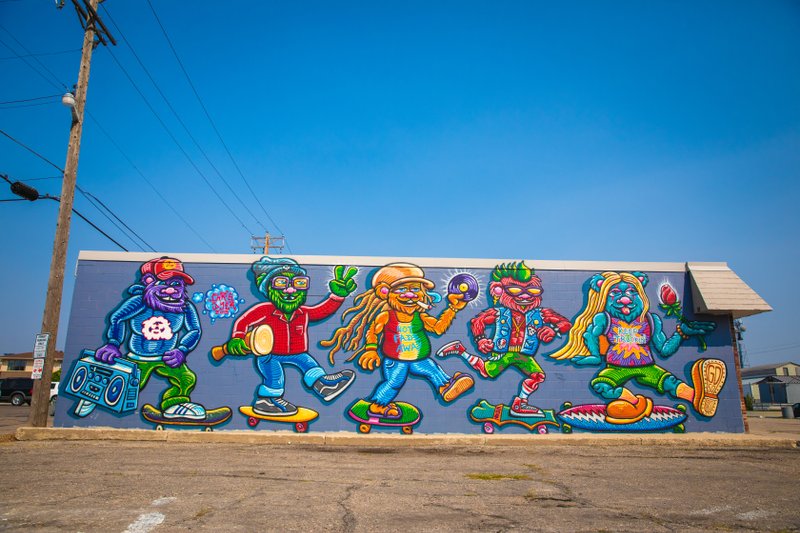 Chris Dyer’s Skateful Dead Bears mural is brilliant. Completed in August 2015, you don’t have to be into skating or Grateful Dead to be intrigued by this piece. 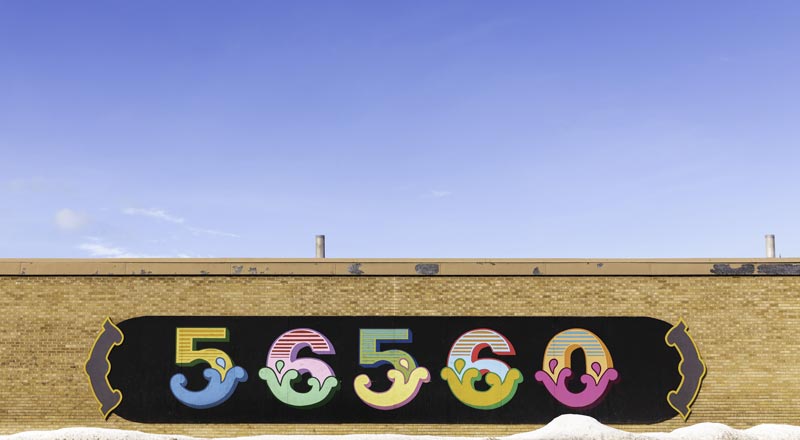 Completed in summer 2016, this mural depicts the zip code of Fargo’s sister city on the Minnesota side of the river, Moorhead. 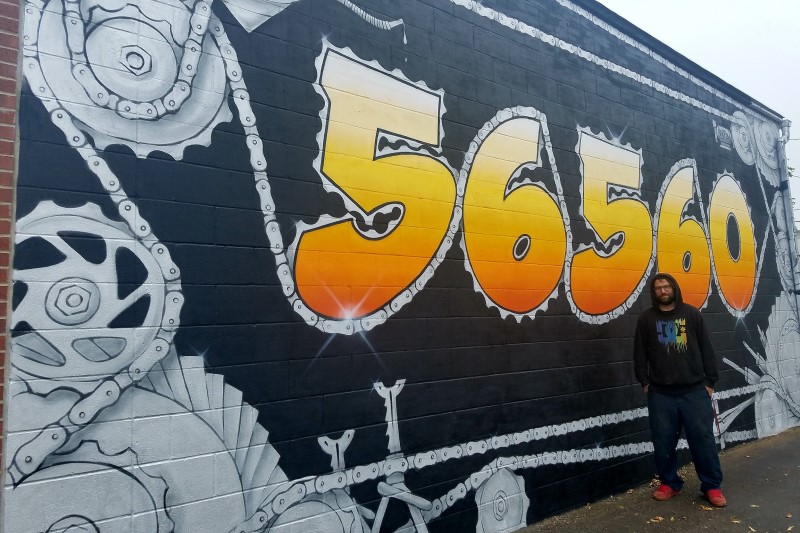 Completed in September 2017 by mural artist Grant Hicks, here’s a second opportunity to get a photo with that notable Moorhead zip code.

For your viewing pleasure

These murals aren’t interactive, but they’re every bit as fun to check out!

Dedicated to Florence Klingensmith, the first licensed female pilot in North Dakota and even the entire upper Midwest, this mural sits on Main Avenue in Moorhead for all to enjoy. 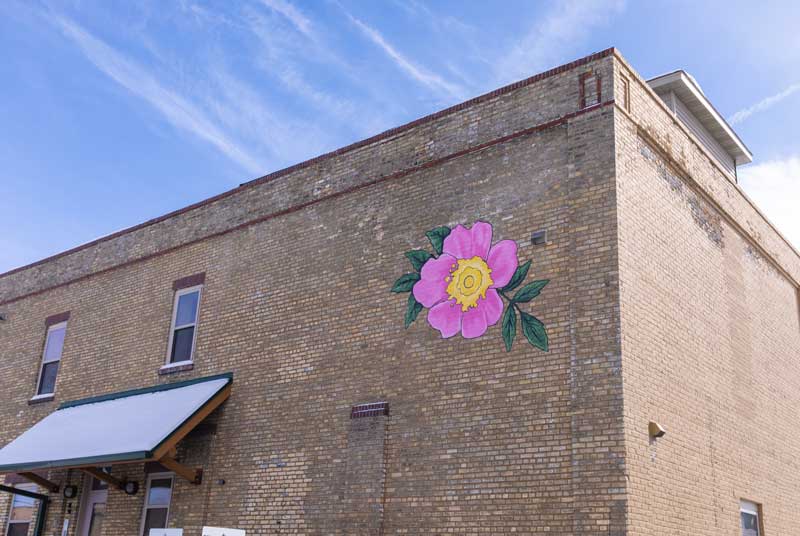 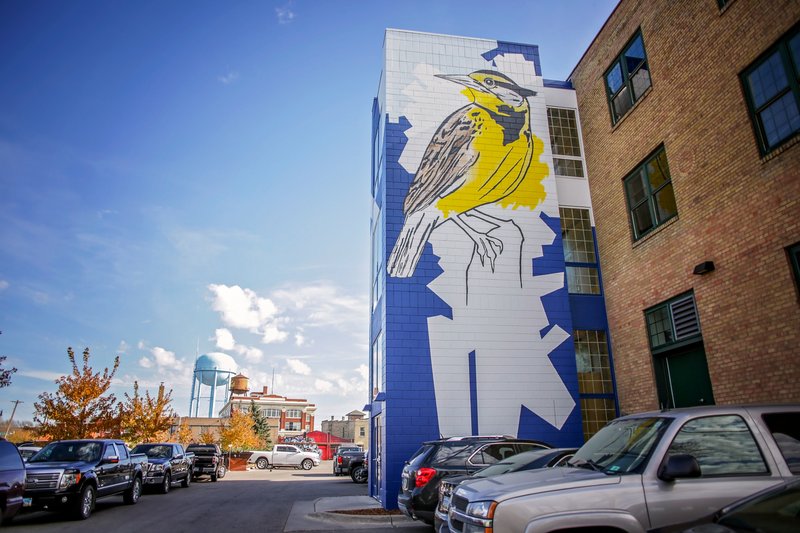 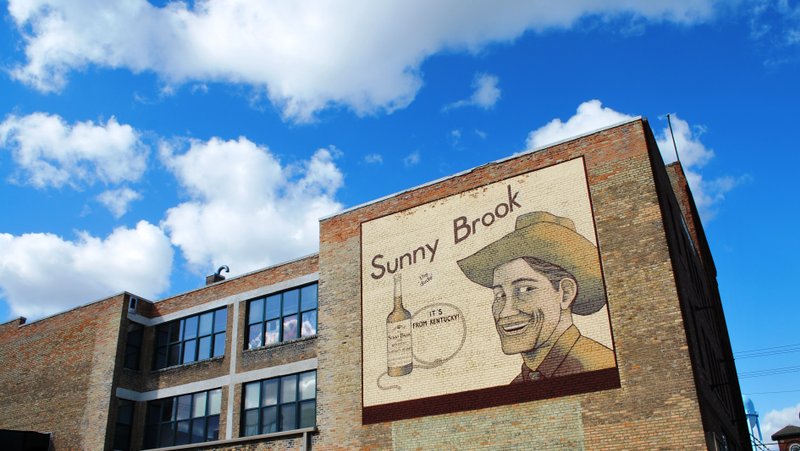 This mural showing a cowboy and a bottle of Sunny Brook whiskey is one of the older ones in the Fargo-Moorhead area. 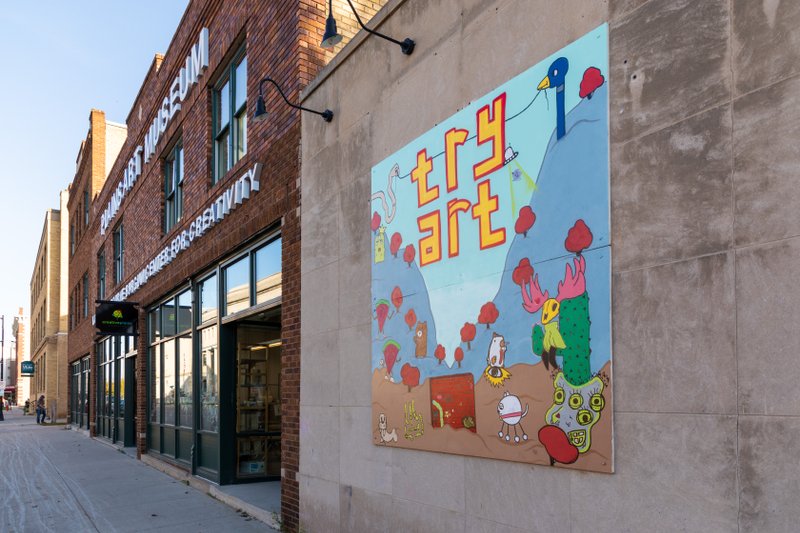 Our local breweries interweave their locations with local artists. These are some of the top spots to check out. 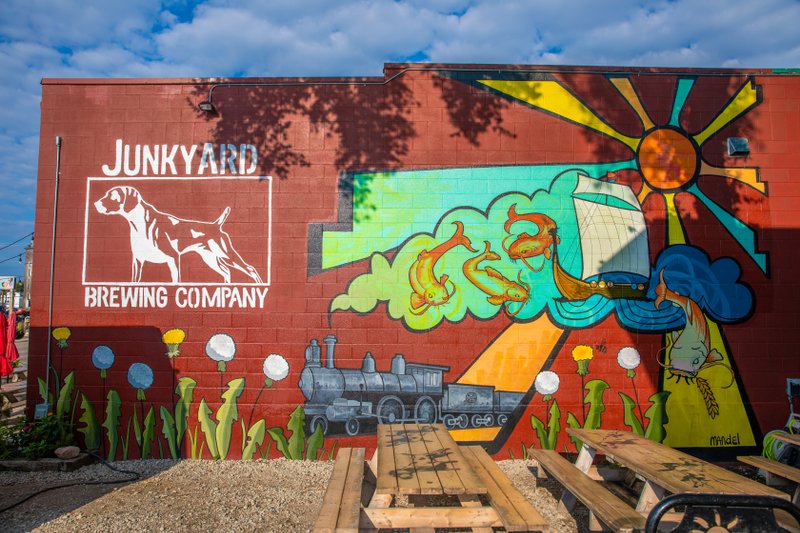 Created by artist Mandel Mertz, this mural on the exterior of Junkyard Brewing Company represents some of Moorhead’s history. The Hjemkomst Viking Ship, a catfish and various other elements are featured in the mural.

Punchgut, a well-known local artist, finished this masterpiece on the interior wall of Drekker’s newest brewery location, Brewhalla. Grab a beer (whose label was also designed by Punchgut) and head to the back room to get your picture in front of this captivating wall.

The oldest brewery in Fargo got its makeover from Fargo-based sign company, Upper Hand Signs. 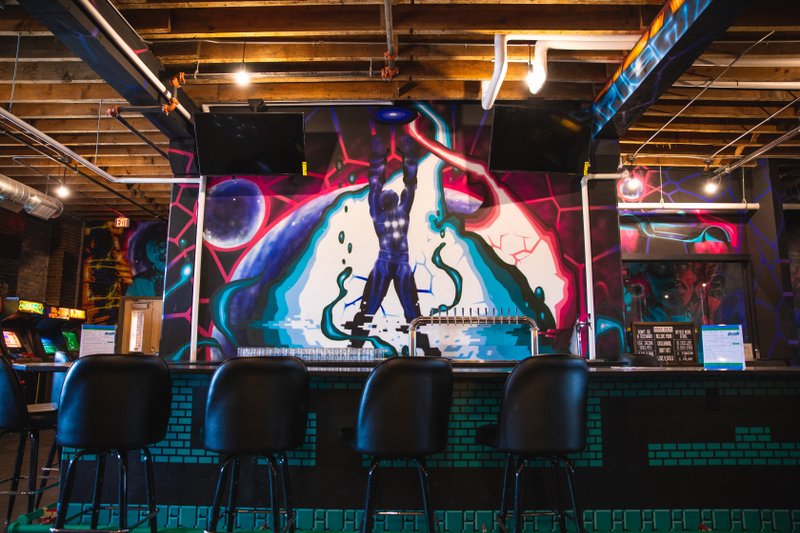 Grant Hicks worked his magic inside Fargo’s first-ever arcade and brewery, Pixeled Brewing. Besides over 50 arcade games, you can find his murals adorning almost every free inch of wall space.

Whether you’re looking for your next perfect Instagram post, or just like to look at some really sweet art, use this guide to the murals in Fargo to find the best spots.