As the photographer and videographer of the Fargo-Moorhead Convention & Visitors Bureau, it’s my job to promote Fargo, Moorhead, and West Fargo through visual images. That means I am required to attend a lot of events that happen around the city.  Here are some of my favorite photos I’ve taken throughout the year. Some have backstories; some don’t. Enjoy.

Just a baby goat eager for snacks at the Arts Partnership’s ChalkFest, in August, at the Red River Zoo.

While shooting Pride in the Park in August, I noticed people covered in glitter. Obviously I had to find out where it was coming from. This is a photo set of the pure joy that described the whole Pride weekend even though it was one of the hottest weekends all summer.

Homecoming at NDSU is always a big deal. Especially when the Bison are 4-time defending NCAA Division I football champions. The homecoming parade, held in October, also hosted “SportsCenter on the Road,” where even more people flocked to the already busy metro area. The Gold Star Marching Band started off the parade, as per usual.

This is Natalie Shaw, Bird Woman, during Trollwood’s Mary Poppins production. It was hard to choose one photo from this show, but this is a solid moment. And one of my favorite songs.

Pride weekend is one of my favorite weekends of the year. This was my first go at shooting most of it. The youth drag show was my first drag show I’ve ever attended. It was so hot in the venue, the August heat was in full effect, and it was packed. Sasha Maria was our wonderful host for the evening. The atmosphere was so inviting and peaceful. Everyone was there to support everyone else. Not an ounce of negativity.

Because we actually had a fall this year and these are the only red leaves in the whole city.

As a person, I love photographing people laughing. Our aim for this shoot was a winter photo for the 2016 Visitor Guide. We wanted to show that we don’t hibernate during the winter, but actually partake in fun winter activities. The guys from of this fat-tire biking group were a dream to work with.

This year I was fortunate enough to direct a collaborative project between the Fargo-Moorhead Symphony and the FMCVB on the rooftops of downtown Fargo. It was a fun project to work with members of this community who love Fargo. Click here to watch the final product!

I make my friends model for me. Taken in the legal street art alley by the inForum building, downtown, during the Red River Market.

I think this photo is a wonderful visual representation of what I think winter feels like: calm, peaceful, frosty and soothing.

11. Fargo Theatre in the Nighttime

A long exposure of the Fargo Theatre. 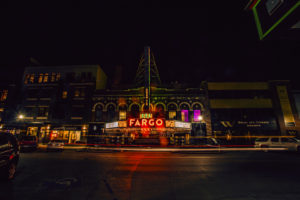